Our topic this month will be choroidal nevi.

What is a choroidal nevus?

A choroidal nevus is a freckle on the inside of the eye, similar to a mole on the skin. It is located in the back of the eye under the retina. This area is called the choroid. Most patients do not notice any symptoms from having a nevus which is typically found on routine examination by a doctor. Rarely, one may have changes in vision caused by fluid that is trapped around the nevus. This may progress to a retinal detachment.

What causes a nevus to occur?

A nevus occurs from pigment cells, called melanocytes, in the back of the eye. These cells cluster together and produce melanin which gives the nevus its color.

How are they detected?

A comprehensive exam is necessary to find a nevus. They can be brown, gray, or yellow in color. Doctors will look to see if they appear elevated on exam and may do additional testing to measure the height of the nevus if necessary. Most nevi are flat or slightly raised.

The arrow in this photo points to a choroidal nevus. 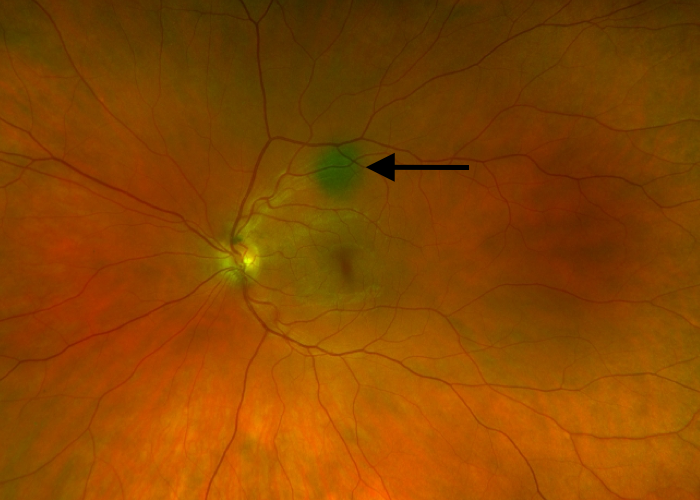 Usually, a nevus is benign and not dangerous. Although the risk is low, a nevus can progress to cancer. Doctors look for changes in color, size, and shape to determine if they are progressing to a more serious condition. Any new symptoms of floaters (black spots in the vision), flashing lights, or changes in vision are important to have evaluated by a doctor.

What are the treatments?

Choroidal nevi do not require any treatment and there is no safe way to remove them. It is important for doctors to monitor the nevus for any changes by taking a photo at every appointment. This may be done every six months to one year. If the doctor suspects a nevus has progressed to cancer, this may need treatment.

Return next month for further discussion on choroidal melanoma.

Call us for an appointment Call Now